Industry experts from domestic and foreign research institutions, universities and outstanding enterprises were brought together at this summit to provide cutting-edge technology information, excellent solutions and practical cases for IOV applications, and to promote cooperation between enterprises. 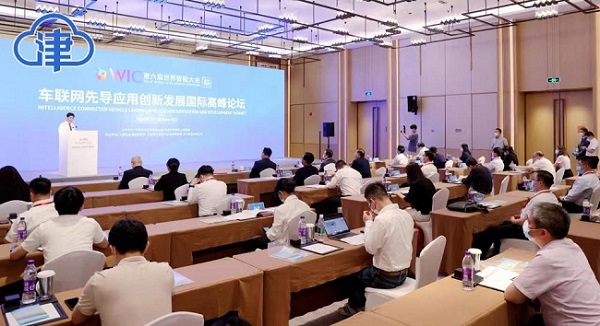 The “Intelligence connected vehicle leading application innovation and development summit” of the 6th WIC is held on June 24. [Photo/Jinyun]

This summit released the remarkable achievements of the national-level IOV pilot area in Tianjin (Xiqing), as well as the evaluation system of human-computer interaction function in the intelligent network, further promoting the rapid development of the IOV industry.

In terms of these achievements, based on the national-level IOV pilot area, Xiqing has built a three-level testing service system: virtual testing field, closed testing field and open testing road, forming a complete process for the research and testing of intelligence connected vehicles.

The vehicle-road coordination project plays an important part in the Tianjin (Xiqing) IOV pilot area. Based on the principle of “operation guides construction”, this project has upgraded and intelligentialized 408 intersections in Xiqing district. Among them, over 60 holographic sensing intersections in the South Railway Station area make up the largest domestic vehicle-road coordination network environment with the highest configuration.

Since the approval of the pilot area, Tianjin Xiqing has participated in setting 88 standards, 19 of which have been submitted for approval and 12 have been issued. At the same time, Xiqing promotes the transformation and upgrading of regional industries. The IOV pilot area has attracted more than 30 enterprises related to intelligence connected vehicles, and has established industry innovation alliances to jointly provide support for the development of intelligence connected vehicles in Tianjin. 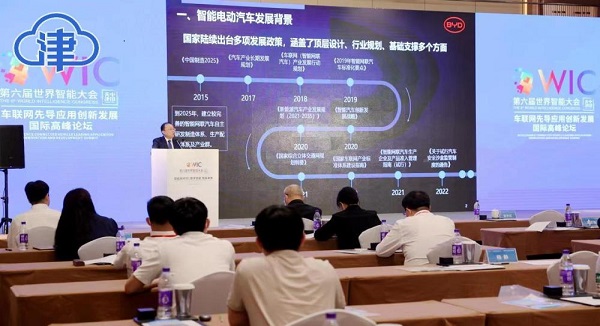 The “Intelligence connected vehicle leading application innovation and development summit” of the 6th WIC is held on June 24. [Photo/Jinyun]

Wu Zhixin, deputy general manager of the China Automobile Technology & Research Center, said that this forum will promote the positive development of the IOV industry, and will further strengthen domestic influence and competitiveness in international cooperation.