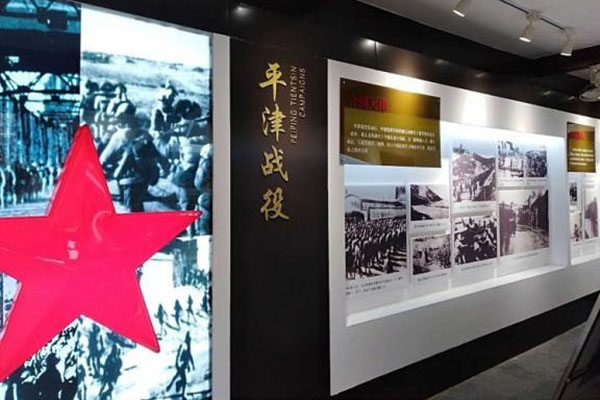 The former site of the PLA headquarters for the liberation of Tianjin in the Beiping-Tianjin Campaign was listed by the Hebei Provincial People's Government as a historical and cultural site under provincial-level protection in 1962. Tianjin belonged to Hebei from February 1958 to January 1967. It was upgraded to a municipality by the central government again on January 2, 1967.

The Beiping-Tianjin Campaign was a major military assault with nationwide strategic importance launched by the People's Liberation Army (PLA) under the leadership of the Communist Party of China (CPC) against Kuomintang (KMT) troops from November 1948 to January 1949. It saw the peaceful liberation of Beiping, today's Beijing, and a complete victory won by the PLA in the battlefields of northern China.

The former site of the headquarters is a square courtyard located in Yangliuqing Township of Xiqing District in Tianjin. The site, which used to house a small-scale private bank, was an important part of the campaign. During that time, Liu Yalou (1910-1965), commander of the 14th Corps in the Fourth PLA field troops, headed a group of military officers to work and live there. Many senior military conferences were held in the square courtyard to steer the progress of the Beiping-Tianjin Campaign. The KMT air force bombed the site on January 1, 1949.

In 1982, the Tianjin Municipal People's Government added the site to its list of historical and cultural sites under municipal-level protection. Two years later, it was renovated as the Museum of Former Site of the PLA Headquarters for the Liberation of Tianjin in Beiping-Tianjin Campaign.

Since then, the museum has acted as an educational base for patriotism and national defense. In addition, it has been listed as a national 2A-class scenic area and historical architecture in Tianjin.

There is a Jeep-branded vehicle used by Liu, aerial bombs and other cultural relics on display in the museum, which consists of a guardroom, exhibition room, staff office and command room. It has collected many pictures and other exhibits to reflect historical scenes in the liberation of Tianjin and help visitors learn about them in detail and review history.