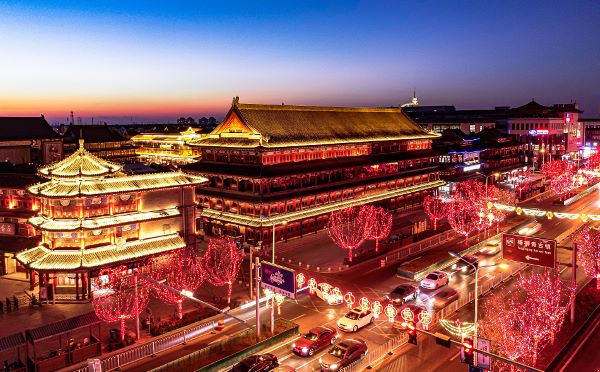 Xiqing is one of the districts in Tianjin, covering an area of 565.36 square meters. It administrates seven towns, five sub-districts, 133 villages. It has a registered population of 438,600 and a permanent resident population of 863,400. Yangliuqing ancient town, where the district government is located, is the origin of China’s Yangliuqing New Year Paintings.

Xiqing neighbors Tianjin's downtown, which has a convenient transportation network that includes not only the Tianjinnan Railway Station (connected to the Beijing-Shanghai High-speed Railway) but also more than 30 railways, expressways, national highways and subways. With a time-honored history, Xiqing district is the hometown of famous martial artists Huo Yuanjia and Han Muxia. As Tianjin's folk culture tourism area, the district boasts a temple originally built during the Tang Dynasty, a section of the Beijing-Hangzhou Canal constructed during the Ming Dynasty, and the residence of the Shi family, known as the No.1 residential house in North China.

Xiqing is one of the first group of nine electronic information industry bases in China and an auto parts export base named by the Ministry of Commerce. It has attracted 50 Fortune Global 500 enterprises and 46 Top 500 Chinese Enterprises to invest and do business in the district. With the chance of the district being approved as a national intelligent connected vehicle pilot zone, it will build a base for the development of new energy vehicles and intelligent connected vehicles. The district is assisting the Semiconductor Manufacturing International Corporation (SMIC) to speed up the establishment of the world's largest single 8-inch integrated circuit production base.

Xiqing has a wonderful environment. In the last three years, the quality of its rivers and lakes has improved by 36.7 percent on average. Air quality is above national standards for 200 days a year. The district’s forest coverage is 33 percent and the green coverage rate of the built-up area is 41 percent. Its urbanization rate is 91.6 percent. Education and medical care have seen significant development and society is harmonious and stable.